Merv Hughes is/was (?) an Australian Cricketer with a straight handle bar job on his upper lip.  The following is from his wikipedia page.  If you know what it means, you have problems:

“A right-arm fast bowler, he represented Australia between 1985 and 1994 in 53 Test matches, taking 212 wickets. He played 33 One Day Internationals, taking 38 wickets. He took a hat trick in a Test against the West Indies at the WACA in 1988-89 and went on to take 8-87. In 1993 he took 31 wickets in the Ashes Series against England. He was a useful lower-order batsman, scoring two half-centuries in tests and over 1000 runs in all. He also represented Victorian Bushrangers, Essex second XI (in English county cricket), Australian Capital Territory, Australia ‘A’ (in the World Series Cup), and Australia.”

Further investigation tells me he was somewhat of a John Daly type who enjoys his food and adult beverages.  He was a contestant on an Australian version of Celebrity Fit Club, twice. 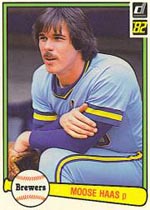 Bryan “Moose” Haas pitched for the Brewers and A’s for 12 seasons, appearing in the 1982 World Series for the Brewers. Moose is also a magician, a black belt in tae kwon do, and a locksmith.

Randy Marsh is the father of Stan on South Park. He is a fighter of parents and Internet connoisseur.