Luis Avalos (born September 2, 1946, in Havana, Cuba) is a character actor. He has made numerous film and television appearances, most notably on the 1970s children’s television show, The Electric Company. He joined the show in Season Two, playing, most notably, Doctor Doolots.

He had the career opportunity of a life time by appearing in a two-part episode of Full House (“Welcome to the fabulous Ali Baba Hotel and Casino. I am Mr. Santana, manager of the fabulous Ali Baba Hotel and Casino”).  Although this didn’t break his career wide open like it should have, he still works today acting in horrible TV shows, and even worse movies like The Ringer with Johnny Knoxville. 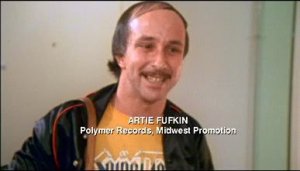 Last night on David Letterman the top ten was “People We Wish Had Mustaches.” It’s a nice list, but somehow the fact checkers at the Late Show missed the fact that Paul Shaffer had a mustache as Artie Fufkin in This is Spinal Tap. Check out the rest of the list below.