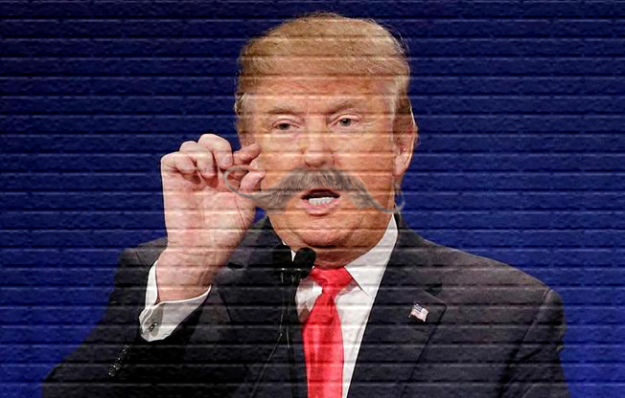 I feel like this guy has been in the news a little bit lately. Here is Donald Trump with a fake steesh, which is possibly the only thing that could make him palatable.

I hope that some friendly Mexican boarder village builds a wall and paints the above mural on it just to warn anyone who has thoughts of immigrating here there’s a 50% chance of having to deal with Trump for the next four years.

I don’t think I’d even care to watch it. It’s a damn shame that the merging of Ron Swanson and pornography couldn’t even yield a real mustache. 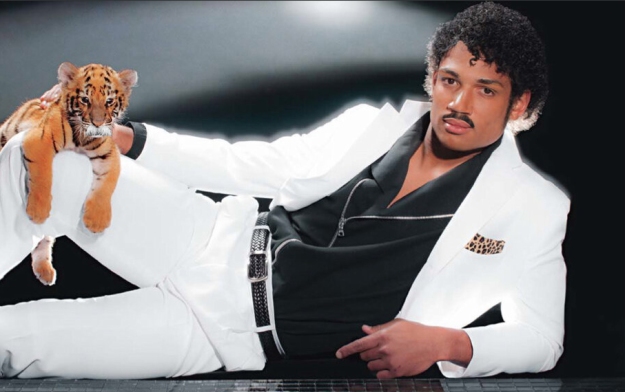 The issue also features NASCAR driver Jimmie Johnson as Bob Dylan and track and field sprinter Allyson Felix as Beyoncé. You’ve got to give it to ESPN the Magazine for knowing their audience. They took athletes their readers might usually not care about and dressed them up as musicians they probably don’t care about. 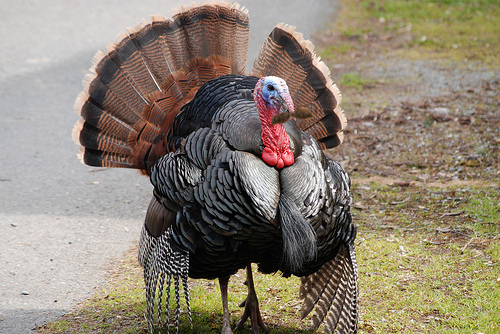 I don’t think animals can grow mustaches, but this turkey doesn’t even need to go to Turkey for a transplant when I’ve got photoshop and a little bit too much time on my hands. 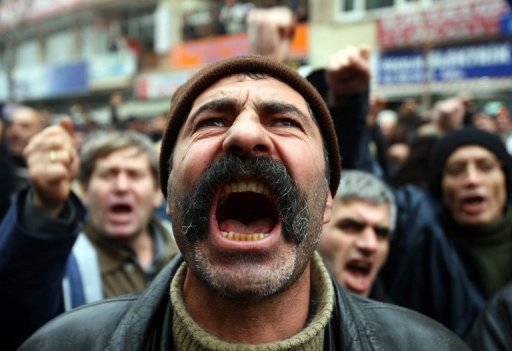 Here at Steeshes.com our motto probably should be “We search ‘mustache’ in Google News so you don’t have to.” As you can imagine, a lot of the time it results in mug shots, or more often than not, it results in nothing. Well today, WE GOT ONE!

Apparently, mustaches are such a big deal in Turkey that guys are willing to get Mustache Transplants!

“Oh, so a few yam-bags have had surgery in order to have a mustache?”

In Istanbul alone there are over 250 clinics that offer mustache transplants and the article uses phraseology like “Hair tourism,” which makes me feel more uncomfortable than I can express in words. 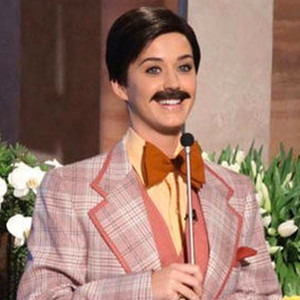 Katy Perry helped Ellen Degeneres celebrate her 55th birthday last week by coming on her show dressed as a male game show host. Male Katy hosted a game called “Grab Ellen’s Bust” which sounds inappropriate if you ask me. I wouldn’t know though. I turned off the video 30 seconds in because I was feeling embarrassed for some of the audience members and how excited they were getting. 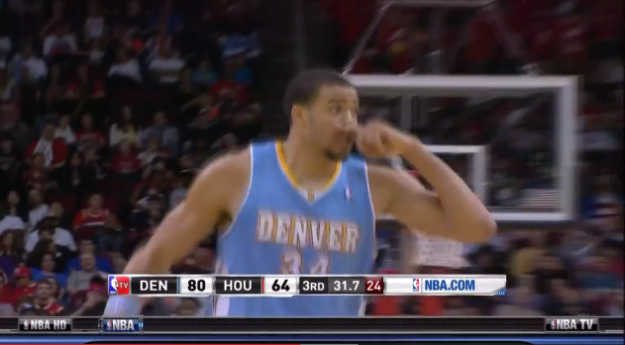 Last night, JaVale McGee of the Denver Nuggets threw himself an alley-oop off the backboard and then celebrated by giving himself a finger steesh. I’ve never heard of JaVale McGee, and frankly I think saying his name aloud makes me sound like I’m having a stroke, but I can become a fan if he does more stuff like that. 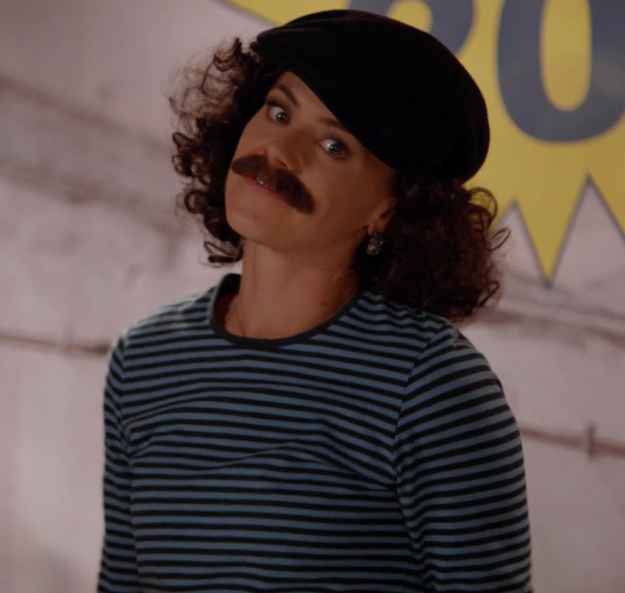 Eliza Coupe plays Jane on the very funny ABC comedy Happy Endings. Here she is dressed as Gallagher, marking his second appearance on steeshes.com in parody form but zero times as himself or his brother.

Judd Apatow, famed writer, director and producer, can now also call himself a magazine editor. He took over the editing duties for this months Vanity Fair for their first ever comedy issue. It may be their first comedy issue but it is just another in a long line of Vanity Fair issues that I’ll never purchase.

Why is this relevant to steeshes? There are 3 covers and each one includes a beautiful mustache. 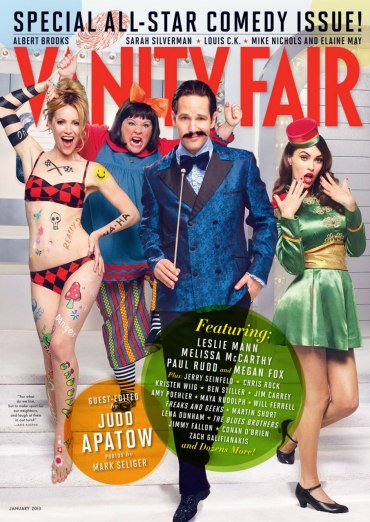 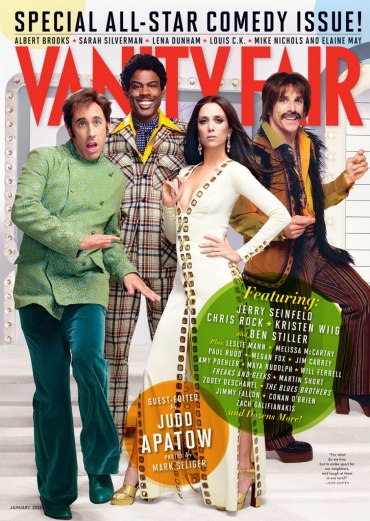 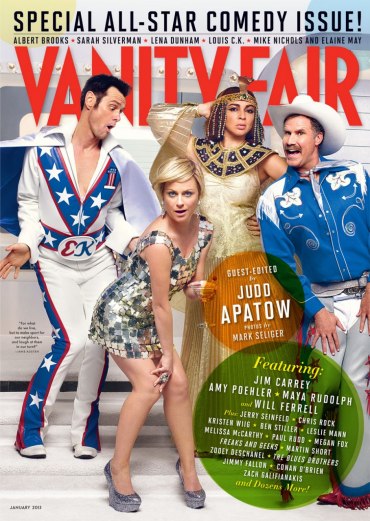 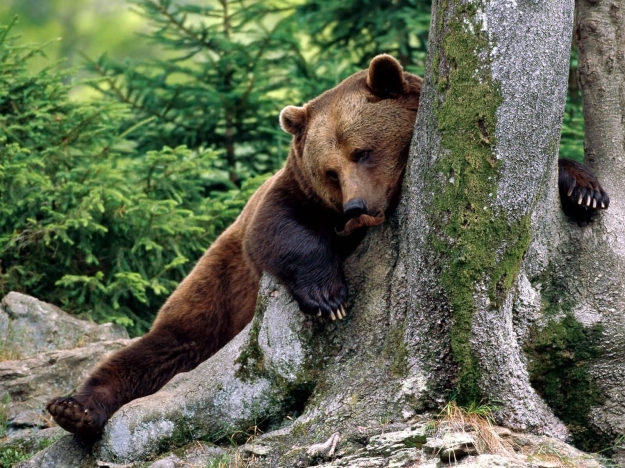 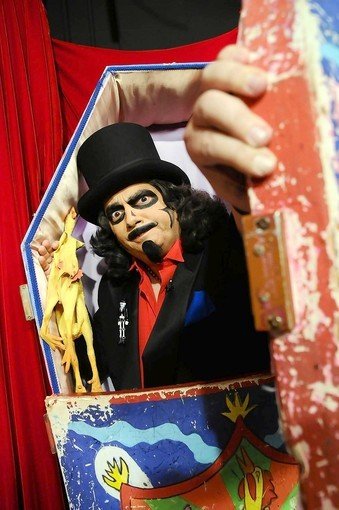 Everyone’s favorite horror-movie host, Richard Koz, better known as Svengoolie, is recovering from a heart attack he suffered this past weekend. I don’t think I’ve ever watched his show but for some reason I love him.

A few years ago I saw a guy dressed as him for Halloween and my cousin and I went crazy. I think we took about 5 pictures with him. Here’s to a speedy recovery!

I mentioned months ago how much I disliked the Gillette commercials with Andre 3000 and Adrien Brody. Now SNL joined the party, and by joined the party I mean replicated the exact commercial only adding super creep Jerry Sandusky: 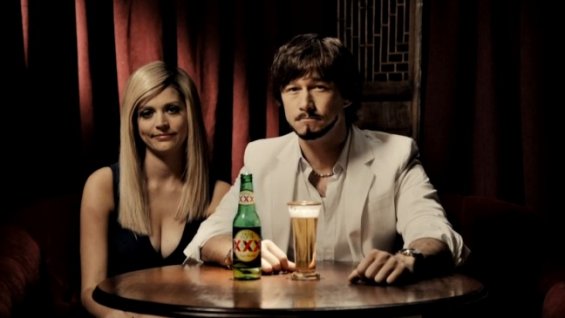 You can watch the video on NBC.com if you have a few hours to kill while their website  loads. 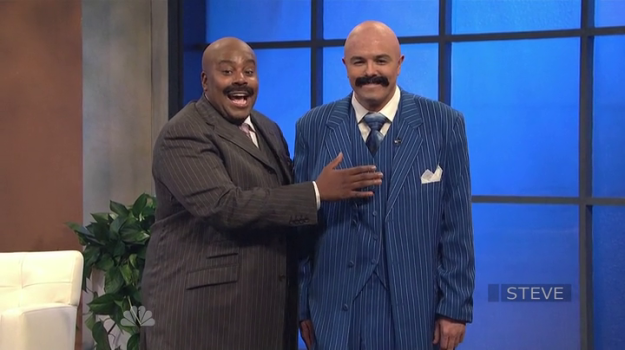 The new season of SNL premiered this weekend with host Seth MacFarlane. In one particularly funny bit, Steve Harvey’s new daytime talk show has a makeover segment where he makes Seth MacFarlane’s character over to look just like him. It doesn’t take much to amuse me.

Update: I tried to embed the video earlier, but as we all know Hulu is the devil so here is the link: 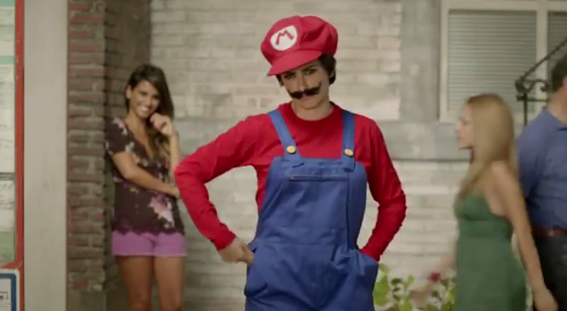 Nintendo had the right idea about hiring Penelope Cruz to dress as Mario in a new ad. Where they went wrong is not having her dress in the Mario Bikini that may or may not exist yet. 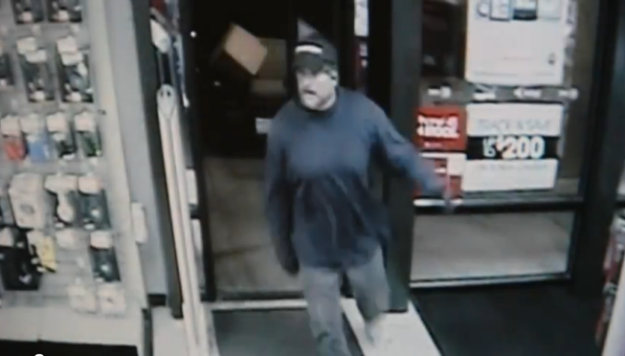 Troy Mullner was nicknamed “The Mustache Bandit” after a string of robberies in Nevada earlier this year. He was just convicted of these crimes.

This guy is a yambag. First off, he thought putting a fake mustache on would make him harder to recognize. Wrong. A mustache will catch people’s attention and make them want to meet you. Get to know you.

Secondly, this guy is robbing Subway Sandwich shops and Radio Shack stores. It’s as if he sat down and planned out the places that would have the least amount of money in the drawers and decided to rob them. I’m surprised he didn’t try to rob a Handy Andy or Blockbuster. 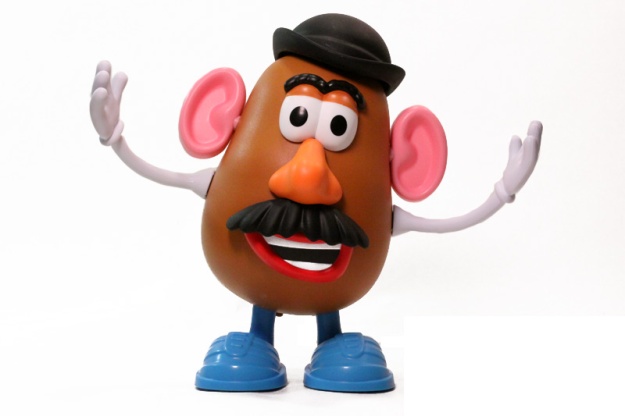 Mr. Potato Head is 60 years old. Wikipedia actually had some interesting facts about it –

“It was the first toy advertised on television and has remained in production since its debut. The toy was originally produced as separate plastic parts with pushpins that could be stuck into a real potato or other vegetable. However, due to complaints regarding rotting vegetables and new government safety regulations, Hasbro began including a plastic potato body within the toy set.”

The original concept was great for teaching kids about life and death and how all good things eventually come to an end. 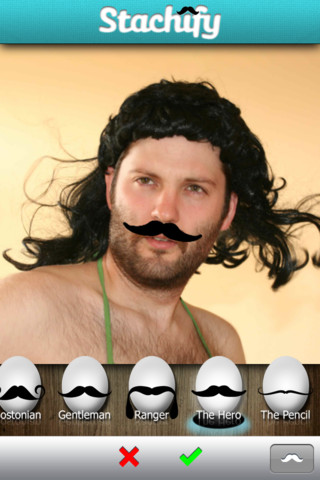 If you can afford a fancy phone but can’t grow a fancy mustache, the people at Stachify have you covered. You can download their app, which is billed to be “like Instagram, but for mustaches.” Sure it is.

You will have to pay $0.99 for Stachify, but it might be worth it. I would download it to try it out, but in the past I got burned by iTunes because they store your credit card information and Internet gypsies are ruthless. 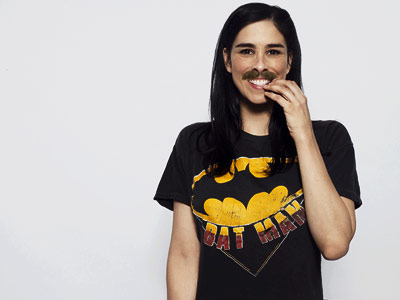 On Saturday, Sarah Silverman hosted a line up of comics that included, Reggie Watts, Marc Maron, Kyle Dunnigan (who came out as a character named Craig, who I recognized from Reno 911!), Natasha Leggero, and it all got started by Hannibal Buress, who I had already seen earlier in the week. This was a serious group of comedians, none of which let me down.

Reggie Watts, was probably the most impressive. He showed off his combination of music and improv talents, my favorite of which was a song about a guy who got up to use the bathroom during Reggie’s performance. 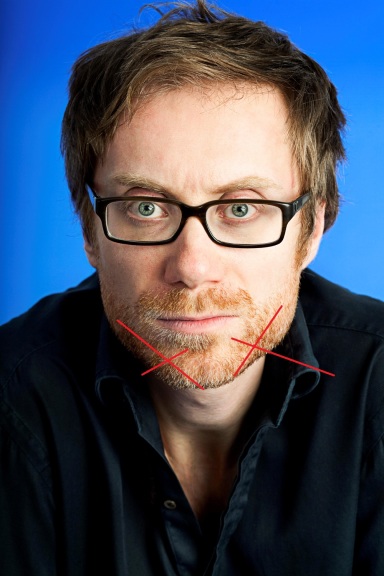 Stephan Merchant, who is the Emmy and Golden Globe award winning co-creator of BBC’s The Office has decided to try his hand at stand-up. I didn’t know what to expect going in, only having seen him on the Ricky Gervais Show. I don’t know if the show was very funny, or I was charmed by his British accent, but I really enjoyed the act.

Merchant made it pretty clear from the start of the show that he was attempting this new venture as a way to distance himself, and his money, from Ricky Gervais. He gave examples of ways that Ricky has overshadowed him in the past, including visuals of newspaper headlines and magazine articles.

Merchant tells plenty of jokes, but the show is more of an account told in stories of the difficultly brought on by being a 6′ 7″ nerd, and his unsuccessful attempt at finding a wife. For his first attempt at parting ways with Gervais, Merchant holds his own. The show is definitely worth checking out if you get a chance.

The show was garbage, but that accent is amazing. 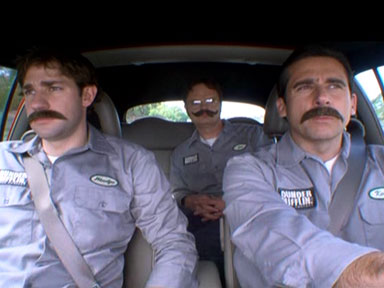 I believe this comes from the episode where Jim, Dwight and Michael drive to the Utica branch to steal a copy machine? I came across it while looking for Michael Richard’s pictures and didn’t want to waste it.

If you ever see a guy with a mustache like Jim’s, just step away. He’s there to kill you. 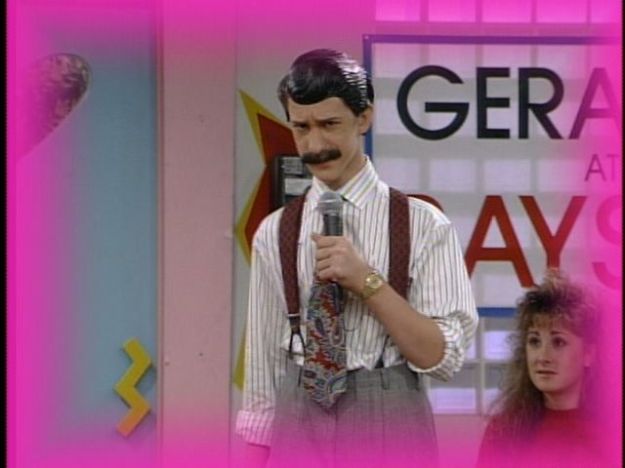 I’m sure we all remember the Saved by the Bell episode where Screech wears a wig and a fake mustache to host a “hunk-off” in Kelly’s dream, so I won’t say anything else about this.

Steeshes.com would like to salute the Newburgh Free Academy. This school honored a former teacher with “Fake Mustache Friday.” There is no greater tribute. 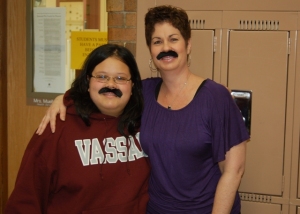 The students & faculty also plan on commemorating this former teacher with a memorial bench. We have a suggestion: 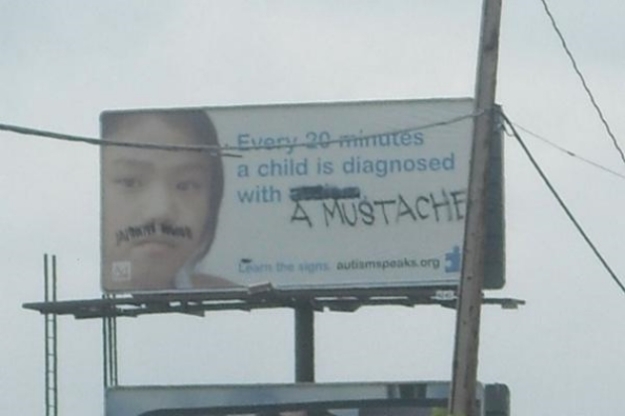 From what I can tell, this picture is a few years old, but I can’t figure out where it came from. It’s new to me though and I enjoyed it very much. 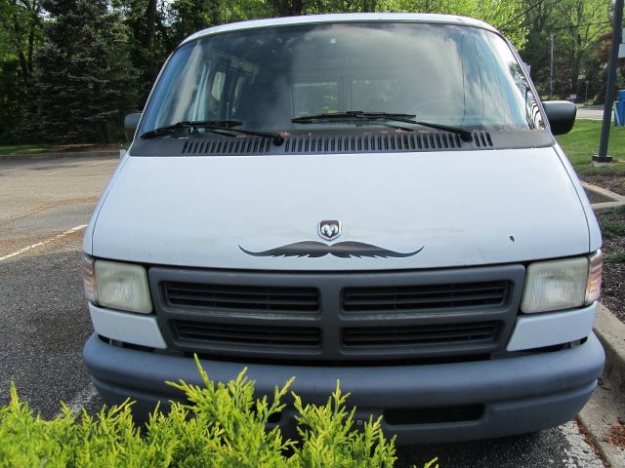 The Internet is a weird place, but you know that because you’re reading this. Now there is a website where you can buy mustaches for your car. From the Fantsypants to the High Roller, I’m sure you can find a steesh that suits your car from Karma Stache.